Have you let your pizza dough sit in the fridge for a few days and now it smells like alcohol? If you’re wondering why that is, and what you can do about it, you’ll be interested in what I’m about to say.

Pizza dough that smells like alcohol is perfectly normal – in fact it’s a sign that the fermentation process is taking place. However, pizza dough with an overpowering smell of alcohol usually means the dough has been over-fermented and will likely have a sour taste.

But the answer isn’t as simple as not letting the dough sit for so long because a long fermentation is a good thing. Avoiding an overly alcoholic smelling dough really comes down to striking a balance between fermentation time and the total amount of yeast used in the recipe.

In This Post: show
1 Active Yeast Produces Alcohol As A By-Product Of Fermentation
2 Over-Fermenting Pizza Dough Can Cause It To Become Overly Alcoholic
3 Less Yeast and Less Fermenting Can Solve Most Problems Of Alcoholic Smelling Pizza Dough
4 Wrapping Up
5 Related Question:

Active Yeast Produces Alcohol As A By-Product Of Fermentation

Something that many people don’t realize is that yeast is not just an ingredient, it’s a living, breathing and growing organism.

Just like all organisms, yeast needs food to live. In the context of pizza dough, the yeast feeds off of whatever sugar has been added first and then begins to covert the starches in the flour to sugar to continue feeding. This is the foundation of the fermentation process.

When the yeast feeds on sugar and flour it creates a number of by-products, namely CO2 gas (carbon dioxide), as well as various alcohols and acids. The gas is what causes the dough to rise while the alcohols and acids are what give the dough it’s unique taste, similar to sourdough bread.

The longer the dough ferments, whether proofing at room temperature of cold-fermenting in the fridge for an extended period, these gasses, alcohols and acids continue to build up.

Over-Fermenting Pizza Dough Can Cause It To Become Overly Alcoholic

If your pizza dough has an overpowering alcoholic smell, it’s usually a sign that something has gone wrong. The dough will still be edible and perfectly safe to eat, but it will likely have a sour taste to it.

The most common reason why pizza dough smells like alcohol is because it was left to proof for too long at too high of a temperature or contains too much yeast.

As time goes on, the yeast in your dough will consume more and more sugars and produce more and more alcohol as a by-product. This process is accelerated at higher temperatures.

All of this means the processes of fermentation will create more alcohol that affects the taste and smell of your pizza dough.

To avoid an alcoholic smelling pizza dough, try the following (ranked from best to worst):

In general, the secret to a delicious pizza dough is ample fermentation. But when this happens with too much yeast, you’ll quickly get an overly alcoholic smelling dough.

So to counter this smell of alcohol, the easiest thing to do is use much less yeast while still giving the pizza dough ample time to proof and ferment.

Many pizza recipes online call for far too much yeast because these pizza doughs are meant for immediate consumption. All that yeast will cause the dough to rise quickly, which is useful when you want it ready in a hurry. But if you leave that same dough to ferment for over 24 hours, it will end up smelling and tasting like alcohol.

I recommend using no more than a 1/4 teaspoon of active dry yeast per 500 grams of pizza dough in your recipe if you plan on letting it ferment for over 24 hours. This strikes a good balance between growth of the dough and minimizing the effects of too much alcohol production.

If your pizza dough smells like alcohol, it’s like the result of using too much yeast or letting it ferment for too long.

If you want to use your dough in a hurry, use more yeast and don’t let it ferment and rise for more than a few hours.

But if you want the benefits of a properly fermented pizza dough, use significantly less yeast and let it ferment for 24-48 hours. Yeast is a living organism so it will reproduce itself slowly over time during the fermentation process.

When yeast mixes with water and flour it begins to break down the starches in the flour to sugar and feeds on it. One of the by-products of this chemical reaction is alcohol, which is why a rising dough can sometimes have a faint smell resembling beer. But if your dough has an overwhelming alcoholic smell to it, it’s probably because the yeast has overgrown and produced too much alcohol. This happens as a result of using too much yeast or letting your dough proof or ferment for too long.

How Can You Tell If Pizza Dough Has Gone Bad?

You can tell if pizza dough has gone bad by examining it for discoloration or other signs of mold. If you’re unsure, throw it out but keep in mind that dough actually has a long shelf life in the fridge – often up to a week or more. The main problem with pizza dough that’s been left too long is that can develop a sour or alcoholic taste or tear due to a weakened gluten network.

Is Over Fermented Dough Safe To Eat?

In general, over fermented dough is perfectly safe to eat – but that doesn’t mean you’ll want to. You can usually tell if your dough is over fermented by the strong smell of alcohol which results from yeast overgrowing and producing alcohol as a by-product. Dough that has been over fermented will usually have a sour taste and not rise in the oven due to the weakened gluten network.

Can Pizza Dough Make You Sick?

How Long Can Pizza Dough Stay In The Fridge?

Pizza dough has a very long shelf life and can be safely eaten up to a couple of weeks later. However, i’s important to keep a couple of things in mind before doing so. As the pizza dough sits in the fridge, it will continue to slowly ferment. This can be a good thing and create an intense flavor similar to sourdough bread, but for long-ferments make sure not to use too much yeast or you’ll wind up with a pizza dough that tastes sour and smells overly alcoholic. You might think pizza is pizza, but it varies quite a bit from place to place. When I moved from NYC to a small town, I was surprised to see the pizza toppings placed under the cheese. This was very different from what I grew up seeing and it got me thinking about why we… 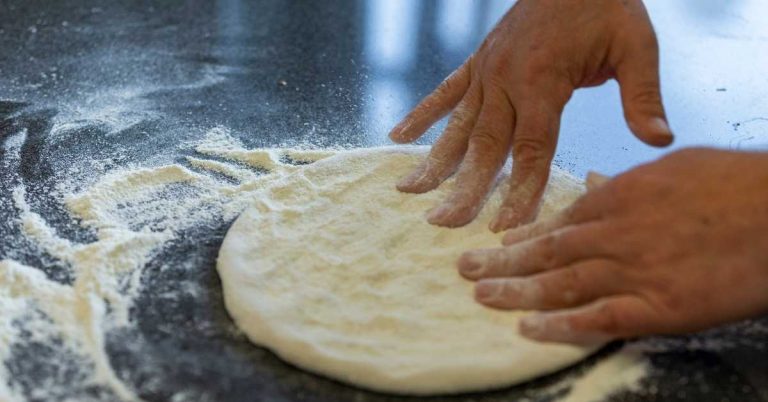 Almost every time I see someone making a pizza on TV or in a movie, someone somewhere is using a rolling pin. It makes sense, after all. You’re trying to make a round ball of dough flat, so why not use a rolling pin rather than stretch it out by hand? In most cases, rolling… There are so many pizza recipes out there and so few of them discuss hydration levels. Maybe that’s the reason why I receive so many questions asking me how hydration relates to pizza dough and which is the best one to use for a home oven. When preparing pizza dough for use in a home… 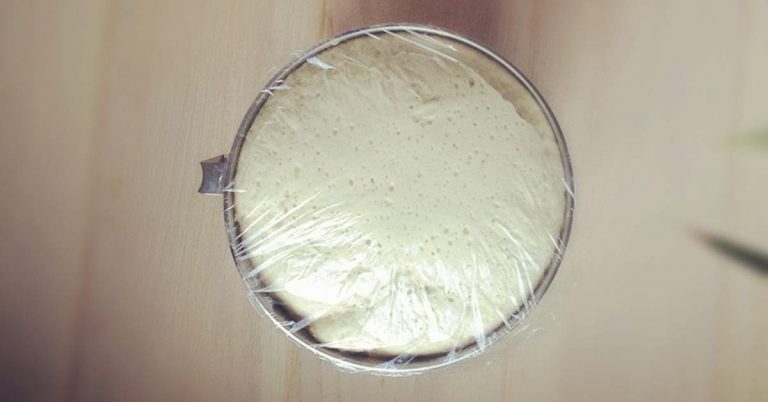 I get a lot of questions about pizza dough preparation – how to handle the dough, how to knead it, proof it, etc. But quite often these questions reveal to me that lots of people don’t understand the most basic concept of baking – how pizza dough rises. Pizza dough rises when the yeast consumes… People often say “even bad pizza is still good”, but if you’ve ever made any of these homemade pizza making mistakes before, you know that’s not true. Pizza can actually be really bad–even terrible sometimes. But it doesn’t have to be this way. Let me show you a few of the most common homemade pizza…