I’ve written a lot about my love of pizza stones, but sometimes I take for granted that not everyone knows how to use one. The most basic function of the pizza stone is to create a flat, super-hot surface, similar to a professional pizza oven. The key to getting the stone to that kind of heat is timing.

A pizza stone should be put into the oven when it’s still cold. Next, set the oven to the maximum temperature and pre-heat the stone for at least 1 hour. After at least 1 hour has passed, the pizza stone should meet or exceed the maximum temperature of the oven. At this point, the raw pizza dough can be placed on the stone and baked to your liking.

Let’s go over when to put your pizza stone in the oven, how long to pre-heat it and what to do when the pizza is finished baking.

When you’re getting ready to make a pizza, the pizza stone needs to go into the oven cold. This is because if you put the cold pizza stone into an already hot oven, the temperature shock can actually cause the stone to crack. At the very least, it will reduce the stone’s lifespan and make it more prone to cracking in the future.

Another major problem I see when looking at pizza recipes online is not giving the pizza stone long enough to heat up. Some of these recipes call for pre-heating the stone for 15-20 minutes, which is nowhere near enough time to reach its maximum temperature. I’ve even seen recipes that tell you put the raw pizza dough on a cold stone in a hot oven, which is just insane.

The pizza stone then needs to be pre-heated for at least 1 hour at your oven’s maximum temperature. This will give the pizza stone enough time to completely absorb your oven’s heat and provide as hot a surface as possible to bake your pizza.

Baking on a pizza stone that’s not hot enough is worse than not using a pizza stone at all. The stone will actually block the heat of the oven and prevent proper browning of the crust.

If your oven is capable of reaching 500F, then you want to wait until your pizza stone reaches 500F as well before using it. The same applies if your oven goes to 450F or 550F, too. It generally takes about 1 hour for this to happen, but it might be shorter or longer depending on your oven and stone.

Letting your pizza stone heat up for shorter and longer periods of time will have very different results, especially in terms of your pizza’s crust. This should make sense since the crust is what’s in direct contact with the stone.

Cooks Illustrated actually did a really interesting study on this recently. To do this they pre-heated their pizza stone for different amounts of time, baked a pizza at each one and then recorded the results.

This study was great not only to see the difference in browning, but to learn what temperature a pizza stone can get to after a certain amount of time. Below is a list of each of these times and corresponding temperature for your reference.

As you can see, the stone that was heated for only 15 minutes didn’t even reach a temperature over 300F, which is far too low to bake a pizza. It’s no surprise that the pizza baked at this temperature was the one that didn’t brown or crisp at all.

On the other side of the spectrum, the stone heated for 1 hour reached a temperature (509F) that was actually higher than the maximum temperature of the oven (500F). This is due to the ability of a ceramic stone to absorb and retain heat. Unsurprisingly, this stone produced the pizza with the best browning and crisping.

Letting your pizza stone pre-heat for at least 1 hour is really just a rule of thumb because most stones will reach their maximum temperature by then. But other stones and different ovens can make this happen more slowly or quickly.

Of course, this isn’t absolutely necessary, but it is nice to double-check that your pizza stone is ready before finally sliding the pizza dough onto it. I’ve averted a couple of disasters in the past where I didn’t have my oven set to the correct temperature and only found out because the laser thermometer reading came in too low.

A laser thermometer is especially useful when using your pizza stone in something like an outdoor grill where there are lots of variable (like the weather) that might slow down the heating of the stone.

Just as putting a cold pizza stone in a hot oven can cause cracking, the same thing applies when taking the hot stone out of the oven too early.

Pizza stones, as well as other kinds of ceramic baking bricks, don’t like huge temperature differential in a short amount of time. So if your stone is super-hot, you don’t want to suddenly expose it to room temperature.

For this reason, you should always allow your pizza stone to cool to room temperature gradually inside the oven. An hour should be plenty of time for this to happen and you to be able to remove the pizza stone safely.

However, sometimes you need to remove the pizza stone quickly to make room for other things you might be baking. If this is the case, try to leave the stone on top of the oven where it’s still relatively warm. It’s not a perfect solution, but it’s better than placing the hot stone right on a cold countertop.

A pizza needs extreme heat to get the kind of results you’d expect a pizzeria or your favorite restaurant. The only way to do this at home is with a pizza stone heated to the correct temperature.

You need to put your pizza stone in the oven cold and then pre-heat it for at least 1 hour, or until it matches the maximum temperature of your oven. Whichever comes first.

So don’t succumb to impatience and throw your pizza on the stone early. You’ll be glad you waited when your pizza is perfectly browned and crisp on the bottom while still being soft and chewy on top. Both pizza stones and pizza pans have a place in my kitchen, but if you’re just starting out in the pizza making game the choice between buying the two can sometimes be confusing. A pizza stone is better for cooking pizza than a pizza pan. Pizza stones are preheated for hours and start cooking the… A pizza steel is an essential part of making truly authentic pizza in a home oven, but they’re also quite big and heavy. As a result, many want to know if they can leave it in the oven when cooking other things. In the following post, I’ll explain why you may or may not want… I’ve said this before but it’s worth reiterating. A good pizza peel is one of the most essential tools for making pizza at home. A pizza peel, of some sort, is literally the only way to get your pizza onto a pizza stone and back off it again. In fact, without a pizza peel you’re… 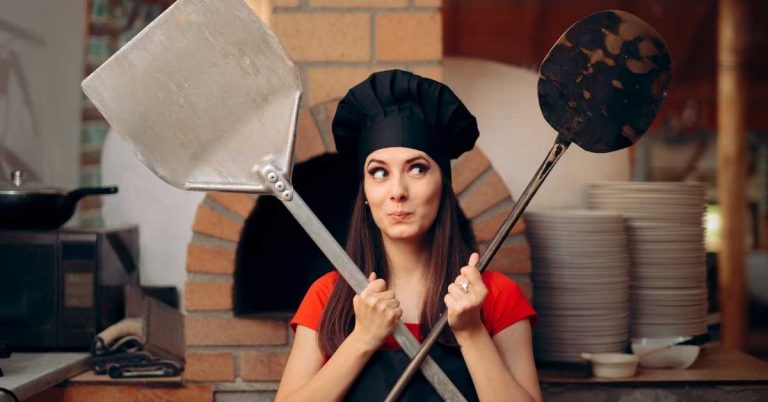 What Is a Pizza Peel Used For? When you see pizza makers on TV or in the movies, they’re often very skillfully transporting their pizzas from point A to point B using long flat paddles. Sometimes they’re even several feet long. These aren’t just movie props, though. These paddles are called pizza peels, and they…